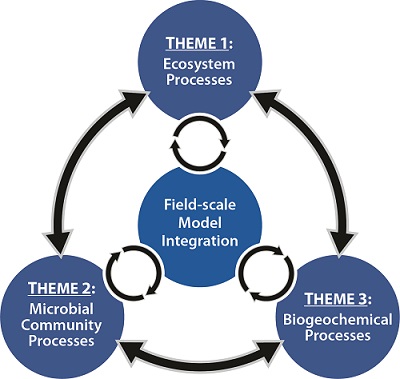 The overall goals of Theme 2 are to (1) understand the mechanisms of Hg methylation at the molecular scale and the consequences to the cell in planktonic and biofilm lifestyles, whether in isolation, synthetic, or natural microbial communities; (2) determine the breadth and depth of Hg-methylating species; and (3) elucidate the biochemical roles of HgcA and HgcB. Our research is designed to answer the following questions:

Over the past 12 months, Theme 2 has published a number of manuscripts and made significant progress toward our milestones, including (1) determining alternative (native) functions of HgcAB, (2) developing an accurate three-dimensional (3D) structural model of the HgcAB complex, (3) identifying and attempting to isolate novel Hg methylators from EFPC sediments, and (4) developing model microbial communities to reflect the EFPC community.

The native biochemical function of HgcAB remains elusive, but its identification is important to understand what controls Hg methylation and how metabolic states and environmental conditions impact activity. We know HgcAB has moved across microbial genomes through independent horizontal gene transfer (HGT) events (Podar et al. 2015). Certain species pairs suggest recent pathway gain or loss, with examples in the genera Desulfovibrio, Desulfobulbus (Deltaproteobacteria), Desulfosporosinus, Desulfitobacter, Clostridium (Firmicutes), and Methanocella (Archaea). If HgcAB is specifically associated with other genes as part of a physiological pathway, such genes would also be lost or gained.

In FY20, we have made progress in elucidating which genes localize with hgcAB during HGT, thereby giving the recipient organism the ability to methylate Hg. We also conducted physiological/metabolic experiments with follow-on omics analysis to determine the carbon pathways used by HgcAB. By determining the co-localizing genes and differential expression, we are gaining clues as to the native function of hgcAB. We evaluated the methylation activity of Desulfobulbus oligotrophicus, which did not produce MeHg. This is the first report of an environmentally (versus mammalian) derived Desulfobulbus that does not methylate Hg. We performed an evolutionary analysis of HgcAB using all available genomic and metagenomic data (>4,000 sequences). While we observed the previously recognized groupings that include Deltaproteobacteria, methanogenic Archaea, and Firmicutes, there are numerous other organisms that possess HgcAB, interspersed with clades that follow phylogenetic profiles. This indicates that (1) the diversity of organisms that potentially methylate is much higher than previously anticipated when we discovered HgcAB and (2) the genes may move within communities at time scales that are shorter than speciation (i.e., recent HGT events).

We hypothesize that the native physiological function of HgcAB may be related to C1 metabolism for acetyl-CoA and methionine biosynthesis, metal resistance, or metalloid methylation. Clues to the native biochemical function of HgcAB may lie in determining the environmental conditions that control expression and translation of hgcA. Therefore, we are investigating transcriptional regulation of hgcA under different growth parameters using D. desulfuricans ND132 as a model organism. We utilized both molecular reverse transcription–quantitative polymerase chain reaction (RT-qPCR) and metaomic (RNA-seq) methods to test whether changes in hgcA expression occurred when wild-type ND132 cells were grown in conditions that require the postulated biochemical functions of HgcAB (e.g., +/– formate, methionine, arsenate, and Hg). Indeed, our results indicate that hgcA expression is significantly regulated across the growth stages of D. desulfuricans ND132 under some but not all conditions tested. We also explored whether deletion of hgcAB in D. desulfuricans ND132 hindered growth or produced any major phenotype in environmental test conditions. We measured differences in the proteome, metabolome, and metal speciation in growth media between wild-type and ΔhgcAB cultures. Significant differences in substrate consumption, acetate and biomass production, and expression of C1 metabolism proteins were observed between the strains under fermentative and sulfate-reducing conditions.

Developing a Model of the HgcAB Complex

Our understanding of the Hg methylation pathway is limited in part because we lack complete structural models of HgcA and HgcB, and the identities of other proteins likely involved remain unknown. Thus, obtaining accurate model structures of HgcAB and any partner proteins that interact directly with them will provide key insight into Hg methylation and possibly alternative functions of HgcAB. In FY20, we generated an accurate model of the HgcAB complex by combining metagenome sequence data, coevolution analysis, and Rosetta calculations. Our analysis revealed that there is essentially no interaction between the two domains of HgcA, but HgcB binds to both of these domains in the assembled complex. The conserved pair of Cys residues in HgcB may bind Hg(II) and position it to accept a methyl group. In addition, there is evidence for domain motion in HgcA that likely plays an important role in methyl transfer. These findings provide mechanistic insight into the biochemical mechanism of Hg methylation and may also reveal other reactions catalyzed by HgcAB.

Although we have some idea which me thylators are present in EFPC, none have been isolated or characterized at the genomic level. In FY20, we have taken steps to develop more robust, rapid, and cost-effective approaches to identify and isolate candidate strains from EFPC sediments. In particular, we have focused on developing methods for anaerobically cell-sorting and growing methylators on agar plates, resulting in several successful runs with strains of Geobacter sulfurreducens and Desulfobulbus propionicus. Recently, we characterized the diversity of some prime targets for isolation from EFPC sediments using a combination of 16S rRNA amplicon sequencing, fractionation of cell populations by flow cytometry, and microbial purification on Nycodenz gradients. These results indicate that there are at least a half dozen species of both Desulfobulbus and Geobacter present in the EFPC sediments. We performed antibody immunolabelling assays comparing reactivity on various culture collection isolates and have now produced new antibodies that will recognize a broader range of target species, which will be used to selectively isolate and grow methylators from EFPC. These efforts not only will allow us to determine if the EFPC system contains novel methylators, but also will provide EFPC system–relevant strains for use in our co-culture experiments. Together, these activities will provide the necessary microbiological data for integrating geochemical and hydrological data into large-scale models.

The distribution and activity of hgcAB+ organisms are important components in developing predictive models for Hg methylation from stream reach to watershed scales. Work at the Smithsonian Environmental Research Center (SERC) and at ORNL has mainly focused on this activity, including expression of HgcAB. To understand organismal distribution, we have employed several approaches to measuring hgcAB in DNA in nature. In FY20, a critical development was the publication of a new approach, the use of hgcAB amplicon specific sequencing (Gionfriddo et al., in review). Combined with the most current library of hgcAB sequences, this approach provides very high depth sequencing, allowing a much fuller and more detailed look at the types of microbes that harbor hgcAB in various environmental settings. SERC used this approach to study how the hgcAB+ distribution in EFPC changes in response to changing electron acceptor conditions. This approach was used in parallel with the ORNL clade-specific qPCR primers to better quantify organisms in each major group of methylators. Proteobacteria were the dominant hgcAB+ organisms in the creek at the time and place of sampling, followed by Chloroflexi and methanogens. Firmicutes and Nitrospirae made up only small percentages of the hgcAB+ organisms. Over a month, the community structure of hgcAB+ organisms did not change significantly at the phylum level in response to different electron acceptors. However, community structure did change significantly at the family level, with increases in Desulfobulbus in sulfate (+SO4) bottles and increases in Desulfarculaceae and Ruminococcaceae in iron [+Fe(III)] bottles. Sulfate enhanced de novo MeHg production from a 201Hg spike much more than nitrate or Fe(III), although biogenic sulfide inhibited MeHg accumulation. MeHg was strongly correlated with sulfate-reduction rates. Total microbial activity did not predict MeHg production or accumulation. Overall, we observed that sulfate-reducing bacteria, particularly Desulfobulbus, disproportionately contributed to MeHg production and accumulation in this experiment using freshwater sediments (Schwartz et al., in preparation).

SERC has also been evaluating the distribution of hgcAB+ organisms in relation to biogeochemistry across a salinity gradient of marsh soils in Chesapeake Bay. This work is a collaboration among Theme 1, Theme 2, and SERC. The study included quantification of hgcAB+ organisms by clade using the ORNL qPCR primers and in-depth evaluation of community structure using hgcA amplicon specific sequencing, including the first test in natural samples of the new ORNL hgcAB universal primers (Gionfriddo et al., in review). Like the Terminal Electron Acceptor Process (TEAP) study, we found a disproportionate contribution to MeHg accumulation from Deltaproteobacteria. Salinity, overall microbial activity, and the relative abundance of hgcAB+ Deltaproteobacteria were the main drivers of net MeHg accumulation.

An important next step in understanding and modeling the role of community structure in MeHg production will be to understand the relative levels of expression of hgcAB among microorganisms and across activity gradients. To help develop protocols for measuring hgcAB expression in nature, SERC is evaluating how expression changes across growth cycles in our model organism ND132. This work involves determining appropriate methods for isolating RNA, creating complementary DNA (cDNA), and quantifying hgcA in the cDNA. The critical choice of appropriate housekeeping genes for normalization of expression has been informed by the transcriptomic and proteomic work on native function in ND132.

In addition, we are in the process of renaming our model Hg-methylating SRB, ND132, and getting it into publicly available culture collections. The Gilmour lab wild-type strain was deposited in the German Collection of Microorganisms and Cell Cultures (DSMZ) this year (DSM 110689). Approved in the American Type Culture Collection (ATCC), deposition is pending re-opening of laboratories after the pandemic. A paper formally describing the strain and its renaming to Pseudodesulfovibrio mercurius (sp. nov.) is complete and ready to submit to the International Journal of Systemic and Evolutionary Microbiology as soon as ATCC receives the culture for deposit.

In FY20, we have made steady progress toward understanding the effect of multispecies interactions on MeHg generation and developing model microbial communities to reflect the EFPC community. Large-volume (1- to 4-L), single-species and dual-species batch cultures have been completed in bottles and bioreactors to characterize growth and chemical profiles for methylating and nonmethylating sulfate-reducing bacteria and methanogens, including Desulfobulbus propionicus, Desulfobulbus oligotrophicus, Methanospirillum hungatei, and Methanococcus maripaludis. We measured a suite of analytical parameters throughout the growth curve for each culture, including growth rates based on optical density (OD) and protein content, Hg methylation, MeHg demethylation, hgcA expression, qPCR and fluorescence in situ hybridization (FISH) determination of relative cell abundance, simple metabolites (anions/cations/organic acids), sulfide concentration, and pH. Methylation/ demethylation analyses are ongoing due to the pandemic, but the pairings of methylating and nonmethylating organisms allow us to disentangle the specific effect of syntrophic interactions on MeHg generation in organisms with very different metabolisms (i.e., sulfate reduction versus methanogenesis). Continuing efforts are underway in FY20 to increase the complexity of multispecies cultures to recapitulate the range of metabolisms present in EFPC sediment, including the addition of Syntrophus aciditrophicus and G. sulfurreducens.

With respect to cell fitness under laboratory conditions, deletion of hgcAB does not significantly change the growth rate of D. desulfuricans ND132. However, maintenance of these genes across evolutionary time scales suggests that they provide an important fitness benefit in the environment. We hypothesize that the fitness effects of an hgcAB deletion are environmentally dependent and that these genes are conditionally dispensable under standard laboratory conditions. In conditions where hgcAB are providing their native function, we expect to see a fitness defect in a ΔhgcAB strain compared to the wild-type. So far, we have measured competitive fitness between wild-type and ΔhgcAB ND132 in more than 20 different media compositions. Although additional experiments are needed, our current results show that the strains grow differently when mixed together compared to when grown separately, despite minimal genetic differences between the two strains. In turn, this result suggests that HgcAB is involved in interactions between cells of ND132. Ongoing work is exploring these interactions in more detail.

The ORNL Mercury SFA is sponsored by the Subsurface Biogeochemical Research (SBR) program within the U.S. Department of Energy's Office of Biological and Environmental Research.